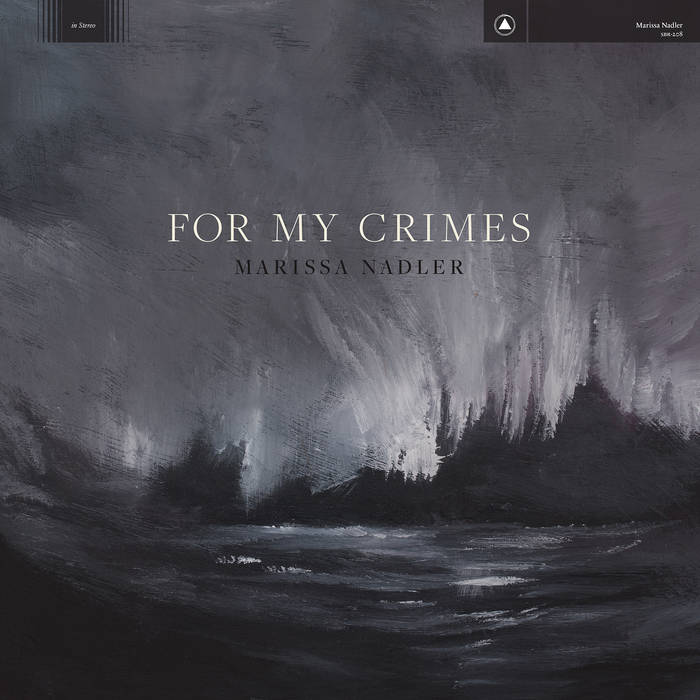 Eric Van Lustbader One of the most gorgeous, moving albums. What sets it apart, besides the melodies and the meticulous musicianship is Marissa's trenchant lyrics. Each track is a short story, or poem, if you like, a slice of life, and experience. You can't ask for more from music. Highest recommendation! Favorite track: Are You Really Gonna Move to the South?.

Ericko Every song has an undefinable weightless melancholy that is pure magic. Favorite track: For My Crimes.

The eighth album from Marissa Nadler, For My Crimes, is the sound of turmoil giving way to truth. The songs stare down the dark realization that love may not be enough to keep two people together through distance and differing needs. By asking these difficult questions about her relationships, Nadler has found a stronger sense of self and a sharper voice as both a songwriter and a vocalist, culminating in her most evocative entry in an already impressive discography. The album is set for release on September 28, via Bella Union and Sacred Bones.

Following the release of 2016’s acclaimed Strangers, Nadler’s relationships were put to the test as she left the Boston area on tour. She wrote throughout 2017 about this tension, and ended up with three times as many songs as she needed. But after reviewing the demos with her co-producers Justin Raisen and Lawrence Rothman, Nadler wrote a flurry of tight but no less intense new songs in the week before arriving at Rothman’s Laurel Canyon studio, House of Lux, in early January. She considered it a challenge to herself, applying new strategies and structures to the craft of “slow music” she’s honed over the last 15 years. From that group of songs came nearly all of the singles on For My Crimes, some of the most indelible of Nadler’s career.

The opening title track is classic Nadler: a sweeping, vaguely Southern drama of voices, strings, and acoustic guitar, that walks the fine line between character song and personal indictment by metaphor. “For My Crimes” spawned out of a songwriting exercise in which Nadler wrote from the perspective of someone on death row, but the song casts a dark shadow over an album that turns marital conflict into inner reflection. Helping Nadler dig down into the song’s remorseful soul is her old friend Angel Olsen, who serves as a distraught echo from beyond in the chorus.

“Blue Vapor” has an intoxicating raw energy luring you in, somewhere between Springsteen and a grunge band playing MTV Unplugged back in the day. It feels at once tight and improvisational, balancing on little more than Nadler’s steady strumming and vulnerable harmonies with Kristin Kontrol (of Dum Dum Girls), until the heavy, purposeful style of Hole drummer Patty Schemel conjures chaos in the second half. This slow burn feeling is all too appropriate for a song centered around repeating patterns and creeping numbness in a relationship. “Blue Vapor” names that strange ambivalence and turns it into a chant that hangs in the air long after the song ends.

Dreaminess and eeriness have often been two sides of the same coin in Marissa Nadler songs. Where “For My Crimes” and “Blue Vapor” come from her dark side, the album has plenty of moments that twinkle in their sadness and sentimentality. “I Can’t Listen to Gene Clark Anymore” is one of those highly specific songs you’ll get if you’ve ever lost a favorite band to your own broken heart. It sways perfectly in its bittersweetness, like a slow dance you never want to end. After the strings swell and the bass pedals kick in, Nadler coos, “Cause I remember/The songs you sang/To me when it was you/I was falling for.” Later, closing track “Said Goodbye To That Car” turns a final odometer reading into a rhythm for a catchy, wistful hook: “1-1-9-6-5-7, and the engine blew/“1-1-9-6-5-7, and I thought of you,” Nadler lulls, harmonizing with herself. It’s an ingenious way to capture the end of an era in one small moment, and she moves as delicately as you would handling an old photo with her sweet oohs.

Bolstering the intimacy of these songs is the strong feminine energy that defined their recording. Between Rothman’s fluidity with both gender and genre (as heard on his 2017 album The Book of Law), and Raisen’s track record of successful collaborations with strong women (Olsen, Kim Gordon, Charli XCX), Nadler felt empowered to explore without judgement in the studio. With the exception of a single saxophonist, every player on the album is a woman of notable pedigree and distinct style, many of whom have played with Nadler over the years. In addition to the cameos by Angel Olsen and Kristin Kontrol, Sharon Van Etten sings backup on “I Can’t Listen to Gene Clark Anymore” and “Lover Release Me.” Mary Lattimore joins on harp for “Are You Really Gonna Move to the South,” while the great experimental multi-instrumentalist Janel Leppin plays strings throughout the record.

These women and others helped make For My Crimes as dynamic as it is intimate, but Nadler’s mesmerizing voice—stripped of nearly all reverb—is what sits at the center of these songs. You can hear the emotional range of her performances more than ever before, from the spectral harmonizing of “Are You Really Gonna Move To The South” to the cheeky boredom of “All Out Of Catastrophes,” two other highlights. As a singer, she has never sounded more confident than she does here.

Adding to the album’s deeply personal feeling is its abstracted artwork, featuring Nadler’s original oil paintings. Though Nadler is a graduate of the Rhode Island School of Design and a semi-retired art teacher (she has one student left—a 95-year-old named Doris), For My Crimes marks the first album cover bearing one of her paintings. She also channeled the album’s themes into paintings corresponding to specific tracks, which will be included as prints in the limited edition version of For My Crimes (and in some cases, for sale as originals on Nadler’s website).